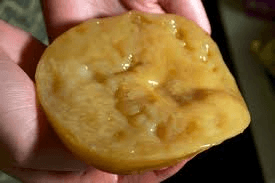 Have you ever had the experience when you become aware of something new or different for the first time, it might be a make of car, a fashion item or an idea….and suddenly you start noticing the same thing everywhere? Some people call it ‘synchronicity’, others believe that what you need to take notice of will present itself to you and psychologists have a slightly different explanation involving our perception and attention.

Whatever you attribute the cause to, it’s an interesting experience and one that has happened to me very recently. At my parents house just before Christmas I picked up a copy of North and South magazine and read a really interesting article reviewing the work of Michael Mosley.  Dr Mosley has devoted a lot of time to work on gut health and the bacteria in our intestinal system or the ‘microbiome’ as it’s known. 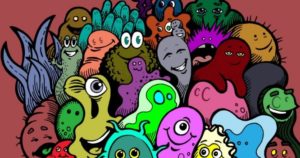 I’m sure most of you have seen the TV advert for probiotics (the good bugs and the bad bugs on a seesaw!) Well the crux of his work (on a very simplified level) is that eating more of certain foods, and less of others, helps increase the good bacteria in our gut and reduce the unhelpful ones. In turn, this leads to improved overall health, both physical and mental.

The reason I start with this Dr Mosley’s work is that it has led me to on a journey into exploring ideas around gut health and the links with overall health. In the spirit of true synchronicity, information, articles and recipes have been ‘popping up’ everywhere for me recently. I even came across a fascinating podcast about gut health (“It Takes Guts” on Audible). There’s an increasing amount of research currently into the links between our microbiome and many other dis-eases including cancer, IBS, food intolerances, depression and even our stress response.

So, keen to start the new year in a positive way, (and with the goal of taking more care of myself) I decided to see what I could do to improve the beautiful beneficial bugs in my own gut! Fermented foods are one of the things which assist with development and maintenance of a health microbiome in our gut and once I started reading Dr Mosley’s work, more and more articles, not just on gut health, but particularly fermenting came to my attention.

According to the BBC Good Food website, fermented foods were predicted to be No 1 in the food trends of 2018. Fermented foods are nothing new of course, many cultures have been using fermentation as a way of extending the life of foods for years. Most people have heard of Germanic sauerkraut and eaten yogurt but we need look no further than Maori culture for examples such as ‘rotten’ corn or the fermentation process used to make Karaka berries edible.  A quick ‘google’ search indicates the extent of the current explosion of interest in this area. There are pages devoted to fermenting for beginners, all manner of recipes, fermenting equipment supplies, books and images of various things bubbling away in jars. There are even a number of Facebook groups devoted to sharing the love of fermenting (I particularly like “Fermenting Freaks Forever” which is a NZ group).

Always keen to try new things in the kitchen I thought fermenting would be a good place to start my healthy endeavours! Despite all my culinary experiments over the years and preserving using other methods such as pickling or bottling, I’ve never really tried fermenting (other than wine of course). My one attempt at sauerkraut last winter was a nasty smelly mess. I’d recently tried Kombucha as a bought fizzy drink in bottles but did not make the connection between this and the large bucket a friend used to keep in his bedroom with a slimy mushroom on top! Neil was obviously way ahead of the trend, he swore by this ‘tea’ and consumed a glass a day ‘for his health’. I took one look and swiftly declined the offer, never thinking that nearly 20 years later I would be the proud owner of more than one of the aforementioned slimy mushrooms – or to be more precise, a SCOBY.

There was great excitement at New Year when my daughter rang to tell me a parcel had arrived at her house for me and my “kombucha starter kit” duly made its way to our place. One jar, some tea bags, some sugar and a piece of slime in some brownish liquid greeted me as I opened the parcel. The expression on my friend Paula’s face was classic…I think she was relieved when I told her it took at least a week to brew!

For those not familiar with this particular fermenting art, the SCOBY (symbiotic culture of bacteria and yeast) sits on top of a brew of sweet black tea and over the course of about 7 days the combination of yeasts and bacteria work to ferment the sugar and turn the liquid into the tangy drink known as Kombucha. In this fermenting process acetic acid and a number of probiotic bacteria are produced, both of which are great for gut health. 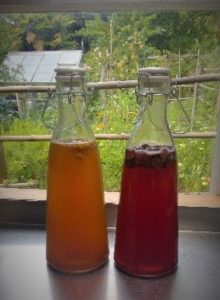 I’ve had amazing fun experimenting over the last few weeks with different teas and flavours and have quickly progressed from my first small SCOBY which fitted into a 1 lt mason jar to a huge ‘mother’ (as they are also called) in a brewing bucket (thank you Phil for the gifted monster).

We’ve tried adding lemon and ginger as well as various berries- mostly with good success although I did end up with one batch of berry vinegar last week! 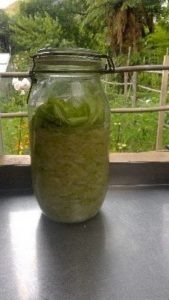 the topic of fermenting came up in conversation. She immediately produced the jar of home-made sauerkraut she carries with her for all to sample! Half and hour and some explicit instructions later I was keen to have another go. This time I think I’ve got it (well as a first try at least) and we have added another ferment into our diet!

One of the unexpected side effects of fermenting seems to be the community of keen fermenters. Starters for sour dough, SCOBYs or kefir grains are often gifted or traded between friends and even strangers and the ‘fermentation’ of ideas seems to be as valuable as the finished product, also good for overall well-being one must think.

Where next with fermenting?? Well maybe Kimchi or kefir …we’ll have to see what the universe sends my way.

It’s early days in my journey to gut health, and fermenting is just one aspect, but it’s one I’m keen to explore further and share with you so watch out for more ramblings on the subject and feel free to share any experiments of your own in the fascinating world of fermentation.

Scroll back to top